Mr. A.: Come into the town with me and see some of our buildings.

Mr. B.: I will do that with pleasure. My train does not go till the end of the morning. The time will go quickly if I am with you.

Mr. A.: The station is in the middle of the town. We come out of the station into a street of stores and offices.

Mr. B.: The walls of those buildings are quite white. Are they new?

Mr. A.: Yes, those high buildings are new. Some are of glass and steel, and almost all have steel frames.

Mr. B.: Is that building between the stores an office building?

Mr. A.: No, that building is the middle is a hospital. There are some of the beds. I see them by the window. Those men are taking a young woman into the hospital. She is on her back.

This wide street is where the great stores are. If we go into it you will see the bright advertisements and all the beautiful things in the windows.

Mr. A.: No, it is quite near. We are high here, and you may get a view of the roofs of the old town. There it is. It is by the river. This is the road to it. I frequently go there.

Mr. A.: No, the buildings across the river are in another town.

Mr. B.: Are those boys and girls coming out of a school?

Mr. B.: Is that church in the old or the new part of the town?

Mr. B.: And a very beautiful building

Mr. A.: We are coming into the old town here. Men and women come to the market from the country with baskets of fruit and other food. They are there in the early part of the day. That is the market-place, in front of the church. In the market they have almost everything for the house. I frequently get old books there. The streets near the market are very narrow and the houses are low.

Mr. B.: The outside of this old house is beautiful but the inside seems very dark.

Mr. A.: It is dark. These narrow streets get almost no light and the windows of the houses are small.

Mr. B.: There is a high building with a wide stretch of wall which has almost no windows.

Mr. A.: That is because it is a prison. It is very near the bridge.

Mr. B.: I see the bridge. Are the workmen doing something to it?

Mr. A.: Yes, they are making a new arch. Come to this end of the bridge where we may see what they are doing. We will not go over it.

Mr. B.: I will go with you to the bridge and after that I will go back to the station. If I am late I may not get a seat on the train. I will come on some other day and see the old town.

Our buildings: "We" is used in talking of any group to which the speaker belongs. It may be used quite naturally in the sense of "all men", or it may be applied to a more limited group, such as the speaker's friends, colleagues, and so on. In this instance, "the our" refers to his fellow-citizens. “They” is similarly used in referring to a group to which the speaker does not belong. There is an example of this use later, in the sentence "In the market, they have almost everything for the house", where they refers to the market stall-holders.

With pleasure: This use of with in connection with emotions and other things that are not physical objects is a natural and simple development.

The end of the morning: Like most words that indicate position in space, end is used also of position in time. But, while things in space have two ends, in connection with time the word end means only 'the last point or part', the first point or part being covered by another word.

The time will go quickly: Come and go are used very widely. They are not limited to the description of actual physical movement.

In the middle of the town: The middle may mean either the mathematical center or a central area, and in the latter sense it may be used quite loosely. With this sense of 'the middle part' it is natural to use in (not at, as for a point), and for everyday purposes the phrase in the middle is used even when we are speaking of position at the center.

A street of stores and offices:  Of is used for pointing to the elements or

Some are of glass and steel:  the material of which a thing is composed.

Steel frames: This use of frame is an expansion. The frame of a picture, in addition to enclosing it, holds it rigid. It is not hard to see the connection between this and a structure giving form and support, for which the same word is used.

Steel frames à frames of steel. All nouns naming substances may be used adjectivally in a similar way.

That building in the middle: When things are placed in a row, the one which has an equal number of things on either side of it is said to be in the middle.

It is quite near: Quite is frequently used, as here, in a weak sense which makes it the equivalent of 'to a considerable degree, fairly'.

We are high here: Compare this use of high with its use earlier in the Step. The buildings were described as high because they measured a great deal from top to base, but Mr. A and his friend are high in the sense of being in an elevated position. The opposite, low, has two parallel uses.

Get a view of: Note this use of get. See also, 'get almost no light'.

Roofs: Note that roof is not one of the nouns which change “f” to “ve” before the s of the plural. The new words in this Step are arch (arches), church (churches), glass (libraries). From this point on, it will be assumed that the learner has mastered those spelling rules.

There it is: Here and there are important exceptions to the rule against putting adverbs first when the operator is “be not” completed by a noun or an adjective, and the subject is a personal pronoun. But note that in this case the subject remains in its normal position and is not put after the operator, as it is when the subject is a noun or a different sort of pronoun (for example, There is the hospital).

I frequently go there: In some cases, the position o fan adverb may be varied by putting it before the operator (or between auxiliary and operator), by the learner should not attempt to do this except with adverbs which have been observed to take this position.

In front of: This is an idiomatic phrase meaning 'in the space at the front of, before'. One could say with trees in front of it, but in front of is common and more colloquial.

Almost everything: Note these two very common compounds. The sense of some here

Something: Is 'a particular but unidentified'. A similar compound, nothing, is formed with no, in the sense of 'not one'. These compounds have no plural forms. Note that the o in nothing is pronounced like the u in much. -- Almost and quite may qualify a noun or pronoun indicating quantity.

For the house: “The” with a singular noun naming a countable is frequently used to indicate the whole class of things bearing that name. In effect, this is just the same as the generalizing use of a in the sense of 'any' which was noted in Step 1.

Near the market: Note that near may be used as a preposition, that is, as the equivalent of near to. There is no parallel use of “for” for “far” from.

Outside: the outside of a thing is its exterior and

Inside: the inside is its interior.

Very near the bridge: Though very is not used with preposition, it is used with near in its prepositional use.

Workmen: A workman is not any man who works, but one who makes his living by manual work.

Go over it: Over, as here, frequently means across, but it is not used in this sense with room.

Go back: Back is used as an adverb having the sense of 'in the direction, or to the place from which one has come'. So go back is used for 'return', put back for 'replace', give back for 'return, restore', and so on.

A seat on the train: Though we may, more exactly, travel in a train, on a train is rather usual. 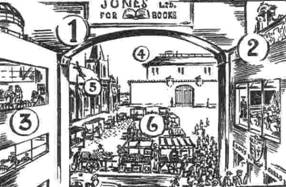 1.  Write a sentence in Basic about each of the numbered objects in the picture.

3.  Write down five words that could fill the blank in this sentence:

4. Use these compound words in sentences: