1 As this word begins with an vowel-sound (the 'h' being silent), the form an is used with it, in accordance with the rule.

The numeral “one”, which was introduced in the last Step, has an important special use as a pronoun, in addition to its ordinary numerical use. It stand for a noun naming a countable which has been used just previously (to avoid repetition), or for one which is clearly implied, and in this use adds the 's' of the plural and becomes ones when the noun for which it stands is plural.

(Note that the singular every one is more emphatic than the plural pronoun all.)

2 Since this and that have a pronoun use, it is optional whether one is put in after them.

In this special pronoun use, one can only be used with a(n), no some, or a possessive or numeral adjective when these are followed by some other adjective.

In addition, one may take the place of a(n) and a noun.

That (those) is always used instead of the one(s) before of as a sign of ownership.

“Do” cannot be used as a substitute operator for be.

The adverb of degree “only” comes immediately before the part of the sentence which it qualifies. In addition to what is usually qualified an adverb, it may qualify a noun or pronoun, in which case it precedes a, the, or any other qualifier.

Though “still” may be put at the end of the statement it is generally given some other position: In simple tenses, it may be put before the operator.

When the operator is “be”, however, “still” may come after it.

When an auxiliary is used, “still” l may come after it before the completing operator.

In questions, “still” may come after the subject.

In negative statements and questions, however, the sense may affect the position of still.

“Why” is a relative adverb, having the sense of 'the reason for which.'

“Again” usually comes at the end of the statement it qualifies.

Adjectives which indicate position in space or time do not take the -ly ending but may be used adverbially without any change of form.

Is:  Is used with the sense 'in the course of' before names of stretches of time, including time itself. But note that In this sense It is used with morning, night, and day only when these are used generally, in which case they must be preceded by the. The idiom at night (see Step 6) is the general parallel of in the morning, in the day. In the night is restricted to the middle of the night.

ON     is used before morning, night, and day, when these refer to some particular morning, etc., that is, when they are qualified by anything but the alone. On is frequently omitted when the time-word is qualified by "the" or a non-descriptive adjective.

The use of these prepositions in connection with time is closely parallel to their use in connection with space. When, therefore, you are in doubt about which to select, remember that we talk of a thing as being at a point, on a line, and in a circle.

AT THE BATHROOM DOOR

[The sound of water going into the bath comes from the bathroom. Bob is waiting outside the bathroom door, which is shut.]

Bob: Are you in the bath?

Jim: No, I am taking off my things. My bath is not quite ready.

Bob: Please be quick because I am waiting, and do not take all the warm water.

Jim: I am only letting in some cold water. The water is very warm this morning. My bath is ready. I am getting into it.

[Some time goes by. Bob is still waiting. The sound of a song comes to his ears. Jim has a loud voice but it is not beautiful. Bob give the door a blow.]

Jim: Are you still there?

Bob [getting angry]: I will not go back to bed at this time of the day. I will be late for my work again if I do not get my bath quickly.

Jim: But I am not making you late. You will get a bath before I do if you get up before I do. If you are late, that is only because you get up late.

Bob: But the water is not warm early in the morning. That is why I do not get up early. And this is not your time for a bath. It is my time. You are the one who is late. This competition for the bath every morning makes me angry.

Jim: This argument which we have every morning is a great waste of time. Be quiet for a minute and let me have my bath. Go and get a new bit of soap while you are waiting. This one is very small.

Bob: If you keep me waiting when I get back there will be trouble.

[Bob goes to his bedroom and gets some soap. When he comes back his friend is still in the bathroom and loud sounds are coming from the bath. Bob gives the door a kick again.

Jim : Are you back ? You seem angry with me. Do not do that again. You may make a hole in the door.

Bob: [angrily]: Are you coming out? If you do not, I will come in. You take almost an hour for your bath. [He gives the door a kick again.]

Jim: I am letting the water out. I am almost ready.

[There is the sound of water going down the drain. Another minute goes by. Bob gives the door a pull. Jim suddenly gives a push from the other side and gets it open. Bob goes down on his back and Jim comes out. He sees his friend and gives a laugh.]

Jim [brightly]: Good morning! Your bath is ready and it is a good one. Be quick. [He takes up a sponge and a bit of soap which is on the floor and gives them to Bob.] Here are your sponge and your soap.

[Jim goes to his room. Bob gets up in pain and goes into the bathroom. It is full of steam and there is water everywhere. Bob gets the window open. He goes to the bath and puts his hand in the water. It is almost cold. He takes his hand out quickly and some drops of water go on the floor. Angrily, he lets out the water, takes his soap and sponge to the basin, and has a quick wash.]

Bathroom: Room for bathing in.

Outside the bathroom door: Outside is here a preposition. Note that inside may be used in a similar way.

My bath is not quite ready: The bath, here, is the bath-water in the bath.

Goes by: When one passes a thing one goes by (or near) it and so going by a thing has come to have the sense of 'going past' it. In this sense, by may be used adverbially, so go by becomes simply 'pass' and can, by an easy metaphor, be used of the passage of time.


Having your bath: Having a bath:  'bathing', bath here being the process for which a bath is used.

We have seen that three different operators, do, give, and now have, are used with nouns naming actions to indicate the performing of them. Why do we do work, give a cry, and have a bath? In general, the names of acts which produce something take do, those in which a single bodily exertion is directed to something outside ourselves take give, and those which are chiefly thought of as something experienced by the person performing them take have. These are not, however, the only operators used with names of actions, and this rule is only a rough guide. It is important to note every example of this kind which we come across, as the uses are, for the most part, fixed.

In a minute: When in is used before a time-word qualified by a(n) or an adjective of quantity, it commonly indicates either the time taken by some happening or the time elapsing before it. Here, I will be out in a minute = 'I will be out at the end of a minute'. On the other hand, I have my bath in an hour = 'The process of having my bath takes an hour'. The general sense of what is being said makes clear which meaning of in is intended. -- Minute is frequently used in the loose sense of a very short time.

Go back to bed : Sometimes, when we use the word bed, we are thinking of the state of sleeping or resting associated with beds rather than of the actual bed itself. In such cases, bed is used without a, the, or any other pointing word in front of it.

This argument which we have : Have is the operator used with argument. Compare with have a bath.

Be quiet : Quiet may mean either 'the opposite of loud or noisy' or 'silent'. Here clearly, it means the latter.

For a minute : For is used before time-words in the sense of 'during'.

Angry with me : Note that with is used after angry to point to the person or persons towards whom anger is felt.

Angrily : When the “-ly” adverbial ending is added to an adjective ending in y, the “y” is changed to “I”.

Take almost an hour : Note this use of take, in the sense of 'use up' or 'require', with time-words. Almost and quite, like only, may come before nouns.

Gives a laugh : Compare with gives a cry in the last Step. Laugh is another example of an action word which may be used with give in the sense of 'emit'.

Brightly:  Cheerfully. Note that this sense comes from an expanded sense of bright at cheerful'. Brightly may also correspond with the root sense of bright, that is, it may mean 'brilliantly, with a bright effect'.

Everywhere:  In (or to) every place. Similar compounds are formed with some and where (Put this somewhere) and no and where (I will go nowhere). 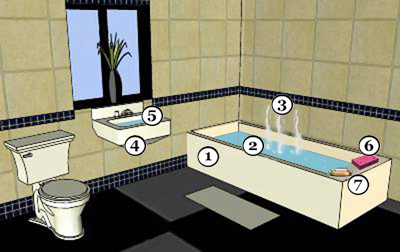 1. What is this a picture of? Name the things which are numbered.

(b)   Is there warm water in the bath and in the basin?

(c)   What is the sign that the water in the bath is warm?

(e)   Why is no steam coming from the basin?

(f)   What do you see which has holes in it and where is it?

(h)   Where is the water going to in the small picture at the top?

3. Fill in the blanks with the right preposition:

(h)   The servant will be at the station before the time _____ which the train comes.

5. Fill in the blanks with the words again, only, still.

6. Using the word why, make a statement referring to each of the following as a reason for some consequences:

(d)   There is great competition for the bath.

7. Substitute does for a phrase in each of these sentences:

(a)   Our servant gets up in the morning before we get up.

(a)   What is Jim doing when Bob first comes to the bathroom door?

(d)   What effects does the competition for the bath have on Bob?

(e)   What does Jim make Bob do while he is waiting?

(f)   What does Bob do when he comes back from the bedroom?

(g)   Why does Jim give a laugh when he comes out of the bathroom?

(h)   What is the condition of the bathroom when Bob get into it?

(i)   Give an account of what Bob does in the bathroom.