“News” behaves like the name of a substance, except that it is never used in the plural (even though it may refer to several items of news) and never used with “a”.

The pronoun “it” is used impersonally (that is, without standing for any noun previously named or understood) in the phrase “it is” (will be, etc.) followed by some information about the time of day, date, weather, temperature, etc.

Learn the Present and Future Tenses of “say”. “To” is naturally the preposition used “after” say to indicate the person addressed.

“How” (the way in which) completes the group of relative adverbs.

With all operators except “be” and “have” (which we have seen, follow the same pattern as the auxiliaries “will” and “may”), questions which may be answered by “yes” or “no” are formed by using “do” as an auxiliary and putting it before the subject, as in questions with the other auxiliaries.

In negative questions of this sort, not comes straight after the subject of do. 1

Note that questions with do in the Present Tense normally refer to general facts or customary actions, except in the case of say 2, see, or seem, when they may refer to the present. With other operators, questions about a present act must use the “-ing” form.

1 Except, when the negative is contracted.

2 The Present Tense of say, both in statements and in questions, is used more loosely than that of other operators. It frequently refers to an utterance just completed.

Questions requiring more elaborate answers than “yes” or “no” are asked with the pronouns “who” (what, which) and the adverbs “how”, “what”, “where”, “why”, “which” are called interrogative pronouns and adverbs when so used.

By putting “who” in place of the subject in a statement we form a question asking for the name or some other identification of the person or persons indicated by the rest of the question.

The woman in the house at the end of the road (has a pain).

The workmen and their families (will go to the island).

A person at my office (does the work).

A man with some plants for the garden (is at the door).

I am the new servant.

The words in the answers which are put in brackets and repeat part of the question are given here only to show the complete construction. They would normally be omitted.

Similar questions about the object of an operator or preposition are formed by putting “who(m)” before the auxiliary or operator and the subject after it. Note that, with an interrogative pronoun, as with a relative, a preposition may be put at the start instead of at the end.

(I will take) all these persons.

(They are waiting for) their friends.

The adjective “whose” followed by a noun, is similarly used to form questions asking for the identification of the owner of whatever is named by the noun.

It is the voice of my father.

The face of an old man.

Parts of a bridge.

“What” is also used as an interrogative adjective qualifying the name of either the person(s) or the thing(s) about which the question is asked.

Only die daughters of the manager.

A street by the river.

She is a cook.

The interrogative “which” is, like what, both a pronoun and an adjective, but, unlike “what”, it may in both cases be used of either persons or things. It is used when asking for the identification of some person(s) or thing(s) from a particular group. This selective sense of which is frequently brought out in the case of the pronoun by following it with of and a word indicating the group.

The girl in the middle.

The end where the seat is.

To the one with the stick.

Those on the table.

Questions with “how”, “when”, “where”, and “why” are asked by putting them at the front of a question of the type which is answered by Yes or No. The answer to a question starting with “how” tells about the way in which a thing is done.

He gets a grip of it with his instrument and gives a pull.

They will go in a ship.

The answer to a question starting with when gives the time at which something occurs.

Early in the morning.

The answer to a question starting with “where” gives the place at which something is or occurs, or to which it moves.

In that first drawer.

(It is) where those trees are.

The answer to a question starting with “why” gives the reason for a fact. The reason given in the answer is normally introduced by because.

Because the window is shut.

Because we put food on the table for them.

Because the ship is late. 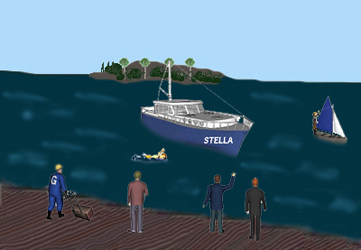 2 . Make a list of all the nouns representing persons which you have learned so far.

3 . Ask a question in connection with each of the numbered things in the picture, using the word indicated in this list:

4 . Far each of the following sentences or phrases, write down a question to which it might be the answer: