A SHIP COMES IN

Why are all these persons at the harbor? A ship is coming from New York today. That is the reason. Everyone here is waiting for someone. the boy and girl by the wall are waiting for their father and mother. The old woman on the seat is waiting for her son. By her side is a man with some red flowers in his hand. They are for a woman friend. The girl in the yellow hat and the black and white coat has a brother on the ship.

The wide stretch of sea outside the harbor is blue, but the water in the harbor is green. It is very clear. I see dark plants under the water, and there, by that boat, is a fish. Do you see its tail ? The fishes in the harbor are very small. Some boys on the harbor wall are getting them in nets. Boats with white sails come and go in the harbor. Some of them go out to the island at the mouth of the harbor. The waves out there are quite high.

What are the boy and girl by the wall saying ? They are putting questions to the woman who is with them. When will the ship come? Does every ship have a flag? What things will their father and mother have for them?

Which side of the ship will they be on? How will the great ship get into the harbor? Does it make the journey from New York frequently? They get no answers to their questions and after a time they are quiet.

Suddenly the boy says, "What is that? Is it the ship? Will the ship come from that direction?" The woman who is with him says. It may be smoke from the ship or it may be only a cloud in the sky. We will see in a minute." Then another person says. "Yes, that is the ship coming into view. There is something dark under the smoke. I see it clearly. It is coming in the direction of the harbor."

The man and woman who are on the seat get up and we all take a step forward and have a look. From the land the great ship still seems very small. The time of waiting goes slowly. The man with the flowers goes back to his seat. It is almost the end of the morning before the ship gets to the mouth of the harbor. The way into the harbor is not very wide. Two small boats are waiting at the harbor mouth. One goes to the front of the ship, and the seamen on the boat take the end of a long steel cord which men on the ship let down to them. The other boat goes to the back and gives a push. That is how they get the ship into the harbor.

The letters on one side of the ship are quite clear. Its name is 'S.S. FLORIDA'. We see the faces of some of the persons on the ship. A man at my side gives a wave. From the ship he gets a wave back. The boy and girl give a wave, but they have short arms and their father and mother do not see them till they get up on the steps.

Someone who is near me says, "Who is that? Is it Peter?"

"There, near the white boat."-

No, that is one of the seamen. But there is Peter, with two men by the rail. He is the middle one. I see him clearly now. He has a blue coat on and no hat. He is making a sign to us."

"You have good eyes!"

In a short time the ship is in its place in the harbor. It is at the end of its long journey. The first persons who get on the ship are the porters. There is great competition for them and some words of an angry argument came to my ears.

Which is your porter?"

"The one with his hands on his pockets."

"But he is my porter. He is getting my things"

"How is he doing that with his hands in his pockets?"

The two men are still in the middle of their argument when another person comes and takes the porter.

While the porters are taking the boxes and bags, some of us go on the ship and set our friends. The mother and father of the small boy and girl take them in their arms and give them a kiss. The old woman gives a loud cry of pleasure when she sees her son. The sister gives her brother all the family news.

One after another, they all come off the ship. The last is the man with the flowers. He still has them in his hand. Trouble is coming to someone. That is clear from the look on his face. Why is he angry? Because his girl friend is not on the ship. Where is she? She is still in New York.

From my bedroom window:  Note that from is used to indicated a point or

From the land: place of observation.

Sometimes:  at some times.

Everyone, someone: in these compounds, one has the sense of person. Everyone: every person; someone:  some person, a person.

The black and white coat: Note the English way of expressing the fact that a thing is partly of one color and partly of another.

The mouth of the harbor: Mouth is used for the opening of a bag, etc. The mouth of a harbor is the entrance to it from the sea.

The waves out there: Compare with putting his hand out (step 11). Out is used to indicate a position away from that which is regarded as the center or base.

Putting questions to the woman: That is, 'asking the woman questions'.

Make the journey: Note that the operator make is used with journey.

Answers to their questions: We give an answer to a question or person in the same way as we say something to a person.

From that direction: Things which follow a direction viewed as pointing

Coming into view: Becoming visible. Note that view is used in this phrase without “the” or “a” possessive adjective in front of it.

Clearly: By an expansion, clear has the sense of 'distinct.' Objects are clear when their outlines and details stand out sharply, as they do in a clear atmosphere. So to see a thing clearly is to see it distinctly.

We all: With the personal pronouns, an alternative way of saying all of us (you, them, it). It to put all straight after the pronoun. In this example, the pronoun is the subject of the statement. Construction is possible when it is the object: He keeps us (than, you) all waiting.

Take a step: Take is the operator used with the action noun step.

Have a look: Have is one of the operators used with the action noun

Look: One may also take a look.

Gives a wave: Wave may be used, as here, for the act of moving the hand in a way suggesting the motion of a wave (as a greeting etc. to someone at a distance). Note that the operator used with it is give.

Gets a wave back: The sense of back here is of 'in return.'

The steps: A structure with a flat surface on which to put ones foot in taking a step up or down is also called a step, and a series of these going from one level to another is simply steps.

The middle one: Note that middle may be used adjectivally.

He has a blue coat on: Have on: be wearing.

Making a sign to: The operator make is used with sign, though it is not used with wave.

Give them a kiss: Give is the operator used with kiss.

One after another:  in succession. Note the absence of any preposition introducing this, adverbial phrase. Adverbial phrases indicating order or arrangement are frequently of this type in English. One is frequently coupled with another in phrase. Of this sort and in general comparisons:  What gives pleasure to one gives pain to another.

The last: the last person. After last and first, preceded by the “or” a demonstrative or possessive adjective, a noun which can easily be supplied may be omitted.

That is clear from: That is 'evident from'. This sense of clear as 'obvious to the mind' is an easy metaphor from the sense of 'distinct to the eye', which was noted earlier. From here means 'because of'. By a natural metaphor, from is used to indicate anything serving as the basis of an effect, conclusion, judgment, said so on, from which it may be thought of as coming.

The look on his face: Look, which, in its root sense, means 'glance, act of regarding' is also used for 'appearance' in general and 'facial expression' in particular. When we the former, we say the look of a face, etc.; when we mean the latter we as the look on a face, because an expression is thought of as a special appearance which a person puts on over the general one.

1 . Answer the next questions:

Where is the boat?

What makes the boat go up and down?

Why does the boy in the boat give the cord a pull?

Which will be the last part of the fish which he will see?

Why do you see the fish in the water?

Where is the basket?

What goes up from the fire?

Where is the net?

Where is the bird?

What other things do you see in the sky? 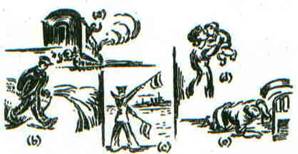 2. Describe the actions that are taking place in the above pictures.

3. Fifteen different compounds can be formed from combinations of the following words:

What are they? Make sentences using six of them.

(a) Who has a brother on the ship?

(b) What questions do the boy and girl put to the woman who is with them?

(c) What do I see under the water?

(d) What answer does the woman give the boy when he says? "What is that?"

(e) How do the boats get the ship into the harbor?

(g) Why do the boy and girl get on the steps?

(h) What do the father and mother of the boy and girl do to them?