Send
Among
Through
Together

The plural of “foot” is irregular.

“Awake” is not used before a noun.

“Opposite” is an adjective naming a relation between one thing and another. Though it may come before its noun, it is often used like a preposition, or with to after it, coming before the noun or pronoun naming that which the first-named thing is said to be opposite.

We come now to the Past forms of operators, so learn the Past as well as the Present and Future Forms of send, which is the last of the operators.

It will be seen from the above examples that the object of “send” may be followed by “to” and “an indirect object”. Sometimes “to” is omitted and the indirect object put before the direct object, the same rules applying as in the case of give

The Past Forms of all the operators except “be” are the same for all persons, singular and plural.

You will have noticed that the Past of send is formed by changing the letter at the end. The other operators which form the Past in a similar way, some with a vowel change in addition, are:


SAY            A voice from the opposite side of the room said, "Will you give me an answer to my questions?
The girls said to their mother, "Peter is putting his tongue out."


SEE            The dress which I saw in the store is not here today.
In the morning the seamen saw land form their ship.

Another group of operators forms the Past by changing only the middle vowel:


COME         No sound came from the direction of the prison.
Some workmen with spades came into the field.

(Note that in the Past form, in addition to the middle vowel being changed, the final “e” is dropped.)

TAKE          She took one of her stockings off and kept the other on.
My friends took me to a beautiful place.

One operator forms the Past by the addition of -ed. 2

SEEM          The old man seemed tired at the end of the day.
All the answers seemed clear.

There are two operators whose Past forms bear no resemblance to the Present Form:

BE               I was on the opposite side of the street when I saw him.
The drink was bitter.
Was the dress a blue one?
You were putting a cord round the parcel.
Why were we having an argument?
The gloves were almost new, but there were holes in them.

Finally, there are two operators which make no change for the past form. The only difference between the Past and the Present is that in the Past no s is added for the Third Person Singular.

LET             The store let her take the stockings.
The birds let me come quite near before they went off the branch.

The “-ing” forms of the operators, which have already been used as adjectives, may also be used as nouns naming the activity. As nouns, they may still be followed by an object, adverb, etc. They come under the same rules as names of substances except that they are never used with “a” or in the plural and are very seldom preceded by descriptive adjectives.

Note the use of a possessive adjective before the -ing noun to indicate the doer.

“Reading” is a noun of the same sort:

An order or request is, as you already know, expressed by using the root form of the operator without a subject. A request for action in which the speaker himself intends to take part is made by using “let us” in this way.

Two further prepositions are introduced in this Step, “among” and “through”.

AMONG     is used only when more than two things are being referred to. We say between when the number is restricted to two.

Through is also used adverbially.

“Though” is also used adverbially.

The adverb “together” is used in connection with both place and time.

1. Fill in the blanks in the sentences describing these pictures, using Past forms in the case of operators.

2. Answer in Basic the following questions about the story illustrated in the pictures on above:

(b) Where did the woman see the flowers?

(c) How did she get out of the field?

(d) How did she get the plant out of the earth?

(e) What did she put back in the hole?

(f) Where did she put the plant?

(g) What did she give to her mother?

(h) What was her mother doing?

(i) What did she do before she put her feet in water?

(j) Who go some warm drink for her?

3. Write sentences about these pictures, bringing in each preposition in a separate sentence. The numbers in brackets under each picture indicate the number of prepositions that it illustrates. 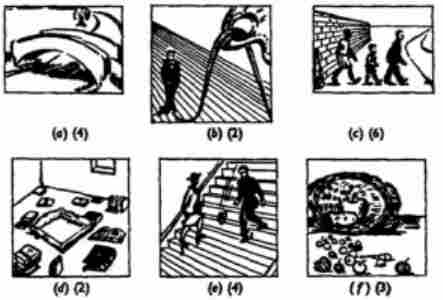 4. Put the following sentences into the Past Tense:

(a) Will they have a walk before they go to the pictures?

(b) They send a parcel to us every week.

(c) Someone lets the bath water out before I am ready.

(d) Some of the flowers in the field are yellow.

(e) These stocking will not get holes in them.

(f) The dress which you have on seems old.

(h) The workman takes his spade to the opposite side of the field.

5. Re-write these sentences to introduce an -ing form used as a noun into each of them without changing the sense: