The plural form of “sheep” is the same as the singular.

“Same” clearly implies a comparison, which may be expressed by adding an “as-statement”.

(a) In dependent statements which have to agree in tense with a main statement that is a Past Tense.

He said that he would send a protest.

(b) In stating something as the effect of a condition which may be expressed by an if-statement in the Past Tense.

An if-statement is put in the Simple Past when the condition it names, though it concerns the present or the future, is contrary to fact, or regarded as improvable, or put forward as a mere supposition, without any suggestion of its truth or falsity.

An if-statement is put in the tense using had as an auxiliary when the condition it expresses applies to the past and is known not to have been fulfilled. When the statement giving the effect or consequence applies to the past, the complex forms “would have” and “might have” must be used.

These are the only uses of “would” and “might” except for certain constructions which will be met in more advance reading and are, in fact, disguised conditional. For example, I would have been able to do it with your help (that is, if I had your help). They are never used except in dependent statements or statements of effect. They may sometimes appear to be used otherwise, but that is only because some part of the sentence is understood without being expressed.

The adverb “how” has an important second use as an adverb of degree before adjectives and adverbs. Its sense is 'to what degree' and in this second use, as in its root use, it is both an interrogative and a relative adverb.

Except when used with “much” and “little”, how can qualify an adjective preceding a noun only when the noun is qualified by a (n), and in this case the usual order is reversed and a (n) follows the adjective.

All the words used both as interrogatives an as relative (what, who, which, where, when, how, why) have a special use, parallel in the use of “that”, “after”, “say”, “see”, etc., to introduce dependent statements. In this use, as will be seen from the examples, they combine their relative and interrogative functions.

Summer Time is an invention for giving us another hour of daylight while we are wake. In a great number of countries most persons get up and go to bed in the dark in winter. In summer they still go to bed some hours after dark, but they do not get up till the sun is quite high in the sky. This is a great waste of daylight.

Someone had the bright idea that if, in those countries, one got up an hour earlier and went to bed an hour earlier, one would have another hour of daylight at the end of the day. It would give most of those who do work in offices the chance of having some outdoor amusement when they got away from their work. The argument was that an increase of daylight would make everyone healthier.

But for most of us, getting up an hour earlier is not a pleasure, and we are not very ready to go to bed an hour earlier at night. We have no desire to make sudden changes in our behaviour. The value of Summer Time is that it makes us seem to be getting up later then we are. Time is a thing not under our control, but we have control of our watches and clocks, and hours, minutes, and seconds are divisions of time which we ourselves have made. So we are free to put the hands of the clock forward to an hour later in summer and to put them back when the winter comes again.

When we make the change to Summer Time, we get up at a different time by the sun, but our clocks say we are getting up at the same time as we did before, and that is a help to us. It is an example of how completely most men and women are the servants of language. If you give the same name to different things, they seem to be the same thing The time for us is what our clocks say it is, and we might be less ready to get up in the summer if our clocks ere not wrong. Summer Time was not given approval by everyone.

The chief protests were made by persons who do work on farms, to whom more daylight give little chance for more play. Getting up an hour earlier is worse for them than for most of us. They get up very early at all times of the year and are among their cows, pigs, sheep, and goats before you or I are awake.

Then they go out to the fields with their ploughs and horses or to do their other work of the farm. When the clock is put forward, it makes them get out of bed before the sun is up. Most of them go to bed earlier, but some of them do not get enough sleep, because one does not readily go to sleep while there is still sunlight outside. The loss of sleep in the summer makes them tired. This was not the only reason why the men on the farms were against Summer Time.

They said that it was not natural and that the earlier start might be bad for the animals. They said that the cows would give a smaller amount of milk and that some of the animals might have trouble with their digestion if they suddenly got their food at a different time. These men were not completely right. There is frequently trouble on a farm when the clocks are put forward or back, but only for a short time, and it is not as great as some said it might be.

The change to and from Summer Time is made in the early hours of the morning, but most persons put their watches and clocks back or forward before they go to bed that night. Then, when they get up, they see the right time. Naturally, when the clocks go forward the first morning is the worst, and when they go back the first morning is the best, because everyone who did not go to bed later then night before gets another hour of sleep.

Daylight: This is the general term for the light of day as opposed to darkness. The golden light produced when the sun is visible is sunlight. The compounds moonlight and starlight are also formed.

A great number: an amount of units, as well as the figure or figures representing it, is a number.

The dark: Dark is used as a noun, with the in front of it, for the condition of being without light.

Most persons:  Most may be used either as an adjective or as a pronoun with of, in the

Most of those:  sense of almost all. Note that, in this use, it is never preceded by the, and that there is no similar use of least.

In winter: “The” is often omitted before the names of the seasons when talking about them in a general way. It may similarly be omitted before day, night, and morning, except to the uses previously noted with in. (Morning is a good time for work.)

Outdoor amusement:   Outdoor: in the open air, not under a roof. The opposite of outdoor is indoor. “Amusement” is used here for 'entertainment' (entertainment frequently being of a kind that produces a feeling of amusement).

The argument was that: The word argument is used for a chain of reasoning for or against something, such as makes up on side of an argument.

Under our control:  By an obvious metaphor, we say that things are under someone's

Control of:  control (or the control of someone) and that we have control over them.

We may also have control of them. Control over generally carries with it the idea of the exercise of some sort of authority. Over and under are used with other similar words expressing command and so on.

Free to put: Note that free may be followed by to plus an operator. One is free to do some particular thing when nothing keeps one from doing it, just as one is free in general when one is under no personal restraint.

Hands of the clock: Hands are frequently used for pointing, and the hands (or pointers) on the face of a clock or watch point to the time.

A help: A help is here a thing which gives help. Compare with the similar expansions of surprise and pleasure.

Protests were made: Make is the operator used with protest.

The sun is up: The sun comes up (into the sky) when it rises, and when it has risen, it is up.

Readily: There is an obvious association between the conditions of being ready and that of being quick or prompt, which, in turn suggests encountering no difficulty. So we talk of a ready answer (given without hesitation), and the adverb readily comes to mean 'promptly, without difficulty’; it is never used in the send of 'preparedly'.

The only reason: Note this adjectival use of only, after the or a possessive adjective, giving the sense of 'the one or more indicated, there being no others(s)'.

These men were right: Right is the opposite of wrong, no doubt because the right hand is generally the right hand with which to do things. The adjectives right and wrong are used both of statements, etc., and of the persons or instruments that make them.

Naturally: By expansion, the adjective natural means 'not surprising, as one would suppose' and the adverb here corresponds with this sense. It is never used at the beginning of a statement except in this sense. 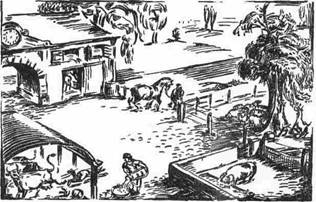 1. Write as many sentences in Basic as you can describing what you see in the picture on the previous page and bring as many new words as possible.

2. Put these sentences into the Past Tense.

(a) He might not say who will have control of the farm after his death.

(b) My opinion is that the goats may get out through that hole in the wall.

(c) If the boy has a look at his watch he will see that he is late.

(d) Young persons will be healthier if they get more time for play.

(e) If she takes a glass of milk before she goes to bed she may go to sleep more quickly.

4. Use each of these words in two different senses: bright, number, right, amusement, second, hand, argument.

5. Fill in the blanks in these sentences.

6. Make a list of the different divisions of time.

(a) What is Summer Time?

(b) What are we free to do with watches and clocks?

(c)  What is the value of Summer Time?

(d) Give an example of how we are the servants of language.

(e) Who did the chief protests come from?

(f) Why do some persons who do work on farms not get enough sleep in summer?

(g) What are they doing before you and I are awake?

(h) What did they say that the change to Summer Time might do to the cows?

(i) Why did most persons put the hands of their clocks back or forward the night before the change to or from Summer Time?