“Trousers” has only a plural form and is used as a plural even when only one garment is being talked about.

This step brings us to the final stage in mastering the operators. You know all the different forms of the operators and the auxiliaries, and you are familiar with the ways in which these are combined to form complex tenses and so on. The following example will remind you of the combinations that have been used in previous Steps and provide models for further combinations on the same lines, which will now present no difficulty.

As will be seen from the above examples, to followed by an operator is replaced by to have followed by the form of the operator used with this auxiliary (to have done, etc.), when referring to an act completed before the time indicated by the main statements. “Having done”, etc., similarly replaces doing etc.

Three new constructions complete our survey of the operator system.

When talking of something as intended or expected, especially in the near future, we frequently use some tense of “be” followed by “going” before “to” and the root form of an operator. (The underlying idea is that by arrangement, or intention, or force of circumstances, the first step to the performance of the act, etc., has been taken - we are already 'on the way to' something we are going to do, etc.)

To indicate necessity or compulsion, we use the operator have followed by to and an operator.

Observe the difference between these two constructions:

To indicate that something is destined, planned, or commanded to take place, we use the operator “be” followed by “to” and an operator

The adverbs of time “yesterday” and “tomorrow” form a group with the compound word today. Like “today”, they may be used as nouns.

“Even” is used to emphasize something as being extreme or as remarkable in going beyond what might be expected. It may qualify as statement, as operator, a noun, an adjective, or an adverb, and, like only, it always comes before whatever it qualifies.

Suitable adverbs of manner (including “well”) may qualify adjectives, and are, for this purpose, put before them. 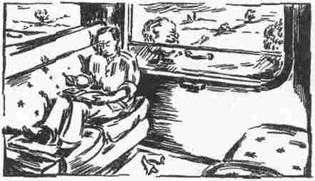 1. Write a description in Basic of what you see in the picture, bringing in as many new words as possible.

2. Put the right tense of the operator in the following sentences. The root form of the first auxiliary and the operator are given in brackets.

(a) He (will, have) an impulse to take the money if no one had been in the room.

(b) He had a fear that his old shirts (may, give) to someone when he was away.

(c) When I see my sister tomorrow she (will, get) the letter I sent to her yesterday.

(d) Do not come at the same time tomorrow because we (will, have) our meal then.

(e) They said that the ship (may, go) in the wrong direction when it went down.

(f) If the boxes had been read they (will, take) yesterday.

3. Change the following sentences into questions, giving the contracted and the uncontracted form in the case of negatives:

(a) She might have had more fear if her baby had been with her.

(b) The animal had not been going against the current.

(c) I He may have been getting a  knowledge of the language.

(d) I would not have seen the trousers even if they had been on the bed.

(e) The work which he is doing has been making his brain tired.

(f) Help would not have been given to him for such a purpose if he had gone to the committee.

4. Complete these sentences by putting even, only, but, though, or if into the blanks :

(b) They were unable to see through the mist ___ they got the ship into the harbor.

(e) _____ they were not able to see through the mist they got the ship into the harbor.

(f) _____ the knowledge that acid fruit is bad for the digestion kept her from taking more.

(h) _____ the knowledge that acid fruit would give her a pain did not keep her from taking more.

(i) He said nothing about this idea ____ to his dearest friends.

(j) The decision was made ____ after a long discussion.

5. Make the following into sentences:

(b) Will have been said

(e) May have been seen

(f) Seems to have been done