THE LAST MINUTE IN BED

Every morning I have the same fight against my desire for sleep. I have been having this fight from the time when I was a small boy. When the time comes for getting up, I am not able to get out of bed. I am late today, I was late yesterday, and I will be late tomorrow.
When I was a younger my father had the idea that my great desire for sleep was almost disease. He said that a healthy young man would get up early, have a cold bath, and go for a run before he went to the office. I myself have never seen a young man of this sort and I have no belief in the existence of such a person. In my opinion he is a fiction. Sleep is a natural pleasure about which not enough has been said in prose and verse.

For some time after I am awake I make not move and I keep my eyes shut. While my eyes are shut, the physical things about me seem to have no existence. I do not see a daylight, though it may been coming through the curtains for an hour or more. So great is the impulse to go to sleep again that I take no interest in the day which is before me. "Why does anyone ever get up?" I say to myself. The need for sleep is the one thought in my mind at this hour of the day. I get as much sleep as any normal person, but by now it will have been made clear to you that a normal amount of sleep is not enough for me.

At this early hour, my brain and my senses are not fully awake, but my hearing is good at all times and the noises in other parts of the house are a sign to me that it is getting late. In a short time I will have to get up. I give my eyes a rub and put my head out form under the bed-covers. The cold air on my nose sends my head back under the covers. After waiting a minute, I slowly put my head out again and have a look at the clock. How quickly the hands go round in the early morning! At other times it is very different if it had been the end of the day and I had been kept late in my work, every minute would have seemed like an hour.

Now I see the minute hand make another move forward. It is almost at the hour. Then the sound of the bell will put an end to all hope of sleep.

Last night my bed seemed and my feet were as cold as ice by the currents of air which got under the bed-covers. Now, even my toes down at the end of the bed are warm and my bed seems to be made of some substance as soft as air. I give my body a stretch. I have a feeling of great physical comfort. Naturally I go to sleep again almost before my eyes are shut.

A minute later my sleep is broken by the sound of the bell. Still I make no move, but I am more awake now and in my mind I go over the events of the coming day. Which shirt am I to put on? That is not a hard question. I have only one good shirt in my drawer. Are the holes in the socks which I took off last night? I will see when I get up. What is the name of the man I am going to see this morning? I have no idea but I may have put his card in the pocket of my coat. Will my girl fried will be in a good or a bad humour when I see her? A bad one, because I said I would take her out and I didn't do so. The accounts were wrong and I had to do them again. So I kept her waiting when she might have been going to the pictures with a friend. Have I enough money to take her to the pictures tonight? No, I haven't enough money even to give her a meal or take her some flowers. This is near the end of the month and I am in debt. Will there be a letter waiting for me when I go down? If there is, I have a fear that it will give me bad news about my mother, who is in hospital. What is that noise? It is rain on the roof. Another wet day and my raincoat is in the country.

Tired by all these thoughts, I go to sleep again, but only for a short time. One is given no chance of sleep in this house. There are loud footsteps outside my room and someone gives a blow on the door. I have a sudden feeling of shame. I give the cover a kick and before the door is open I have one leg out of the bed.

"What have you been doing? Aren't you ready? The water is boiling and the food is on the table. It will have got a quite before you are down." The same sort of thing has been said at the some time every morning for a year.

It is the rule of the house that no food is ever to be kept warm. The purpose of this is to make one get up. A cold meal is the punishment for not being down at the right time. I'll be down in a minute", I said in a bright voice, and get out of bed with a jump. Why aren't my meals sent up to my room? Why is nothing done in this house for my comfort?

The door is shut again and the footsteps go away. I take one last look at the bed and have an impulse to get back under the covers, but I do not do so. I put my face in a basin of cold water and give my body a wash. After a quick rub I am dry. Where did I put the collar of my good shirt? It is nowhere in my drawer. It may not have been sent back from the wash. I have to put on my old one. When I put on my socks I see that there are holes in the toes, but I do not take them off because my other socks have even worse holes. Now I get into my trousers and put on my coat. It is the start of another day.

Have the same fight against: Note that have is the operator used with fight. A fight - may be either against something, as here, or with it (compare argument with).

From the time: Note that from is used in the same sense of 'since'.

Go for a run: go out for the purpose of having a run for exercise or pleasure. The same construction is used with walk and the other nouns naming spells of exercise etc.

Belief in: We talk of heaving a belief in that which we believe to be a fact, or true, or right or good.

In my opinion: Note this use of in with opinion to express the idea of 'according to'. One cannot use in with idea and thought in the same sense.

In prose or verse: Note this use of in for 'in the form of'.

Make no move: Make is the operator used with the action word move.

So great is the impulse: Note that, for the purpose of emphasis, an adjective qualified by so frequently changes places with the subject of be. Such used before that may by similarly inverted (Such is the impulse that...).

Give my eyes a rub: Rub is another of the group of action words with which give is used.

It is almost at the hour: That is, at 12, marking the completion of a given hour.

Put an end to: terminate.

Give my body a stretch: In addition to its root sense of 'expanse', stretch is used for the 'act of stretching', by which the expanse, or stretch, of something is increased.

Made of:  We talk of a thing as being of the substance composing it and so it is natural to say that we make a thing of a substance.

Physical comfort: Physical is very commonly used, as here, in the limited sense of 'bodily'.

My sleep is broken: That is 'interrupted'.

Go over the events of the ... day: Go over:  survey, in detail, from beginning to end. Through has a similar figurative use with go and is practically interchangeable with over, though it sometimes suggest a greater degree of effort.

Take her some flowers: Note that to may be dropped and the direct and indirect objects transposed after take, as after give and send. Similarly, a statement using take in the Passive Form may have either object as its subject (She was taken some flowers).

In debt: in the condition of having debts.

Footsteps: A footstep is the sound made be a step.

Feeling of shame: shame is used for both 'sensation' and 'emotion'.

With a jump: by means of a jump. Compare with a push with a stick.

The same sort of thing: a thing or things of the same sort. Note this commonly used alternative construction.

Back from the wash: back from being washed of from the laundry.

The sense of the compound word minute-hand is clear without note. 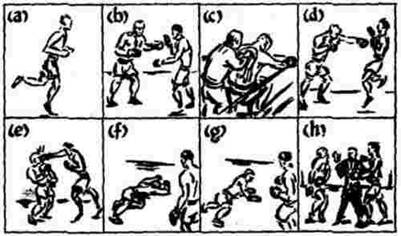 1. Describe what is taking place in each of the pictures above. Bring at least one new word or phrase into your description of each picture.

2.     a) Write five sentences using have followed by the name of an action.

b) Write five sentences using give followed by the name of an action.

3. Fill in the blanks in the following sentences:

e) ___ his opinion there is no answer to that sort of question.

f) We went ___ the accounts to see where they were wrong.

g) Have you any belief ___ what this person says?

4. Write a short account in Basic of getting up in the morning.

a) What do I do when first I am awake in the morning?

b) What did my father say a healthy young man would do in the morning?

c) What is my opinion about the healthy young man of whom my father gave an account?

d) How much sleep do I get?

e) What sends my head back under the covers?

f) What do I do to my eyes when I put my head out from under the bed-covers?

g) What do I do when my sleep is broken by the sound of the bell?

h) Does my bed seem different in the morning from what is seemed the night before?