Made into a skirt: Note that we make a substance “into” an object, and compare with make an object of a substance, noted earlier.

A cold: As a noun cold: 'Inflammation of the nose and throat', a complaint which one is more liable to catch when one gets cold.

Well cut: 'Well shaped', that is, cut from the material in such a way that it fits well, is smart.


Makes me seem thinner: “Thin” is the opposite of fat as well as of thick.

Putting on fat: Getting fatter. As a noun, fat:  adipose tissue. To put on (that is, 'develop additional') fat is an easy metaphor.

Sweets: As a noun, sweet:  sweetmeat or sweet dish.

At present: A contracted form of at the present time.

Well covered: To be well covered is to have one's bones thoroughly covered with flesh. Note that well is often used with this sense of 'thoroughly, to a considerable degree'.

Room for: By expansion, room may mean space which is or might be occupied by something.

Let it out: To let out a garment is to let some of the material which has been turned inside at the seams come out, that is, to make it looser.

Scissors: Scissors has only a plural form and is used as a plural even when only one instrument is being talked about.

Underclothing: The "-ing" form from cloth means 'putting clothes (not cloth) on (a person)'. By further development, the noun clothing comes also to mean 'clothes'. Underclothing: undergarments. The 'o' in clothing is pronounced like the 'oa' in road and the 'th' as in there.

That will do: Do is used, chiefly in the future, for 'do what is required, serve for the purpose in question'.

Pointing: Pointing means 'directing a point towards something', and direction or object in this way, frequently, as here, with a finger. The thing indicated by pointing is preceded by to or at. When at is used, the thing with may be used as the object of pointing (pointing here finger at). Pointed may have either the corresponding sense or the sense of 'having a point' (as a pointed stick).

Is of no use: By expansion, use may mean 'function, and in this sense it is one of the words like interest, which is preceded by of in the sense of 'having. Of use: 'useful. Of no use is frequently used loosely, as here, for 'impracticable, unsuitable'.

Rule: In its expanded sense, a rule is a strip of wood or other substance used for making straight lines or measuring with, as here, where the dressmaker is clearly measuring the distance of the hem of the skirt from the floor.

All round: All has an adverbial use before adjectives, etc., in which it means 'at all points' or 'completely'.

Put it on quite straight: A thing is said to be straight when it is 'level, in the proper position'. Straight has no "-ly" form but may be used as an adverb without any change.

Pinned to:  attached to by means of a pin.

Taken it in: To take in a garment, etc. is the opposite of to let it out.

Arm holes: The openings left in a dress for the arms to go through and to which the sleeves are attached.

It is the best quality: By expansion, quality: degree of excellence, grade. The qualities which a thing has determine what its quality is in the expended sense. Note that quality, in this sense, is another word before which be is used in the sense of have.

Stitching:  'making stitches, sewing' or "putting stitches into, getting fixed (to, etc.) with stitches."

Get you to make a parcel of: Get you to:  persuade you to. Get in this sense is used in a way parallel to make in the sense of 'compel', but with the important difference that the operator after get must be proceeded by to. See also "get this sort of collar to keep flat", below. Note that we may make a parcel of something or make it into a parcel.

Printed cotton:  Cotton material with a design printed on it.

A copy: A copy of a book or periodical is one specimen of it.

The latest number: Latest is here used in the sense of 'most recent'. An issue of a periodical is called a number. The reason for this is that frequently each issue is numbered for purposes of reference.

Have in mind:  have in one's mind as a purpose or idea.

A band in white: By expansion, a band is any narrow strip of color, ornament, or contrasting material.

Which would be better, black or white?:  Note this construction.

Notebook:  Book for making notes in

Free the day after: Free may be used, as here, in the sense of 'disengaged.'

1. Fill in the blanks in these sentences about the picture with new words learned in the Step: 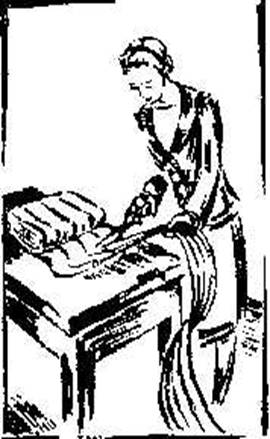 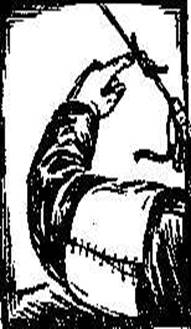 (a) What keeps the two bits of cord together?
A:

(d) What keeps the two ends of the band together?
A: 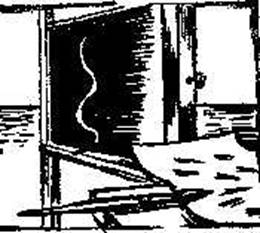 (g)What is on the blackboard?
A:

(h)What was the line made with?
A:

(i) What has the brush made on the paper?
A: 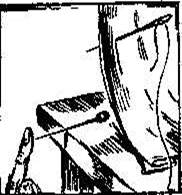 (j) What is the finger touching?

(k) What is through the cloth?

(l) What is at the other side of the cloth?

(m) What is through the hole of the needle?

3. Make a list of as many different articles for wear as you can think of. What general heading world you give to such a list?

4. Use each of the following in a sentence:

5. Make changes in these sentences without altering the sense:

(a) Will you make a dress for me with this silk?
A:

(b) If she gets any fatter she will have to make her skirt wider.
A:

(c) The pages were fixed together with a pin.
A:

(d) If the drawer is not completely full, put this linen into it.
A:

6. Use each of the following in two sentences in two different senses:

(a) What sort of cloth was Mrs. Brown’s skirt made of?
A:

(b) Why was Mrs. Brown looking her worst?
A:

(c) Which part of the skirt was let out and why?
A:

(d) What did the dressmaker do with the bit of chalk?
A:

(f) How did the dressmaker take the stitches out of the band of the skirt?
A:

(g) Why did the dressmaker go round the skirt with a rule?
A:

(h) What did the dressmaker do before Mrs. Brown took her skirt off?
A:

(j) What had the dressmaker done to the silk dress?
A:

(k) How did the dressmaker make a knot in the thread?
A:

(l) What sort of dress was Mrs. Brown going to have the printed cotton made into?
A:

(m) What did Mrs. Brown do before saying when she would be able to come again?
A: