I go to my office in a train. Trains to and from the station are frequent.

I am with a friend. He goes with me to the station. He is an office friend.

At the station I get tickets. That is the window of the ticket-office. I get the tickets from the man at the window. These are the tickets. I give a ticket to my friend and put the other in my pocket.

Those men there are the station porters. My friend puts his bag on his box and gets a porter. The porter takes the bag and the box.

A woman comes into the station with flowers in her hand and a bag and a cushion under her arm.2 In her other hand is a book. Its cover is white. Her box is by the ticket-office. Another porter goes with her and gets the box. It is a round box.

The train in the station is not my train. It is a slow train. My train is a quick train.

The woman with the flowers comes to the door. She takes the cushion from her porter and puts it on the seat.

A man with a flag in his hand comes to the front of the train and the trains goes.

Trains to and from the station: trains coming to the station and trains going from it.

An office friend: That is, a friend among one's colleagues at one's office.

I put the other in my pocket: The other is a short way of saying the other ticket. There are quite a number of adjectives which may be used in this way (as pronouns) when the noun they qualify is understood. We shall note them as they come in. Other is the only one that forms a plural, like a noun, by the addition of s. Note that in the plural, it need not have the, etc., before it (see with others later in text).  The compound “another” may also be a pronoun.

With flowers in her hand and a bag and a cushion under her arm: In English; possessive adjectives are used before nouns naming parts of the body in cases where other languages might use the word “for” the “or” word at all.  Note that, when a preposition points to two nouns joined by and, it is not usually repeated.

In her other hand is a book: An adverb etc. may be put at the beginning of a statement of which the operator is be not completed by a noun or adjective.

Here is my train: This order with be (subject to the condition stated above) is obligatory with here and there when they are not emphatic, that is, not used definitively to distinguish "this place" from "that place." Compare the order above: My house is here. The station is there.  The possessive adjectives are used very widely in English to indicate that a thing relates in some way to the person or persons in question.

The back of the train:  Back and front may be used loosely for 'the more or less rear portion'

The front of the train:  and 'the more or less forward portion.' 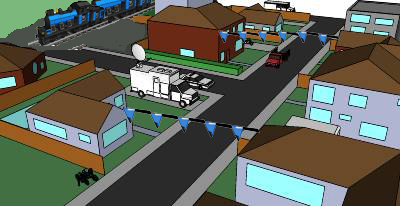 1. Describe in Basic what you see in the picture bringing in as many new words as you can.

2. Fill in each blank with one of the new words you have learned in this Step :

3. Change the word order in these sentences.

(c)   Here is the station and there is his house.

(d)   The man takes a ticket from his pocket.

4. Substitute a pronoun form for the words in black print.