A noun is a word used to name a person, animal, place, thing, and an abstract idea.
The only form-change in English nouns is the change from singular to plural. The regular plural is formed by adding an “s”.

An adjective is a word that describes or modifies a noun or a pronoun.
Descriptive adjectives are used:

(a) Immediately before a noun.

(b) After some form of BE (or SEEM, see Step 7) to qualify its subject.

English adjectives are invariable, with some exceptions that will be learned in the next steps.

“A” becomes “An” before a word starting with a vowel sound, but apart from this, “A” and “The” are invariable.


“A“ is used with a singular noun (in cases where the more emphatic numeral one (1) is not required) when talking of one of the group of things or persons so named. It simply indicates that we are speaking of a single thing, without, like the, pointing to it as any special one. Any noun referring to a single distinct object, such as pot, must have “A” before it, if it is not qualified by the, one, or some other non-descriptive adjective.

Because it is unselective, it may be used with the force of 'any' or 'all' for making general statements.

“A” is naturally never used with a plural noun. When the reference is unselectively to an unspecified number of things named, or to all of them in general, the plural noun may sand by itself.

“The” is used before either a singular or a plural noun when what is being talked of has been singled out by previous reference or is the only thing, person, or group to which the description appliers.

Note: As will be seen from these examples, when a noun is qualified directly by a descriptive adjective in addition to “A” or “The”; “A” or “The” precedes the other adjective.

This Table gives the form changes of the personal pronouns. In this Step and the next you will meet on I, its possessive adjective my, and it.


As you will see, there are not many pronoun forms. The changes of form indicate whether the pronoun is singular or plural, the part it plays in the sentence and, in the case of the third Person Singular only, whether what the pronoun stands for is a male, a female, or a thing. 1 The possessive adjectives corresponding to the different pronouns are used only preceding a noun and are invariable like other English adjectives.

“This” and “that" are pointing pronouns.

The pointing need not be a physical act.

They are also used as pointing adjectives, taking their plural forms before a plural noun. These are the only adjectives which have any change of form.

In accordance with the rule at the end of Section 3, this, that, and the possessive adjective my preceded any descriptive adjective before a noun.

The 'operators' of Basic English are a special selection of the verbs of ordinary English. They are called operators because most of them name simple physical operations.

Many English verbs express complete ideas combining the senses of several parts of speech. For example, disembark = 'get off the ship’; that is to say, it may be broken down into the operator get with a preposition and a noun. Most languages have verbs of this complex kind. In Basic they are expressed by putting together simpler units. The operators are key words in the Basic system. Complete familiarity with their senses, their form changes, and the ways in which they combine with other words is an important step towards becoming fluent with the limited vocabulary of Basic.


Almost all prepositions in Basic are names of directions or positions in space. These 'names of directions', as they are called in the Basic system to emphasize their nature, are the chief group that combine with the operators to form verbs. Get the simple physical senses of the operators and the simple spatial senses of this group into your head for a start. You will find that all the other uses which you meet later are based on these.

A phrase starting with a preposition may be put after a noun to identify the thing in question more exactly.

“And” can join words, phrases, or statements complete in themselves (that is, independent statements).

Two nouns joined by and are treated as a plural.

I put a pot on the round table. 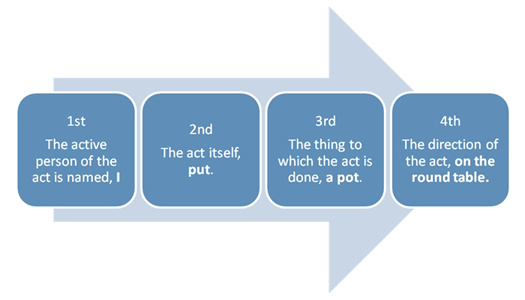 They are, of course, many alternative types of sentence, but this word order is the primary pattern, and it is used throughout the first two Steps. “Is” and “are” do not name an operation which is done to any thing or person or in any direction. They merely link the subject with a noun, adjective, or preposition, etc. qualifying it.

1. Write four sentences in basic describing what you see in this picture. Use one of the following prepositions in each sentence: between, by, in, on. 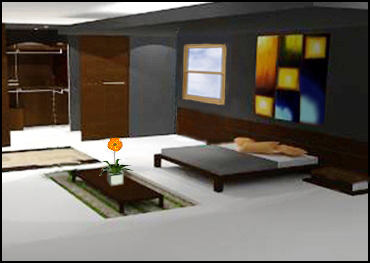 4. Change this into a statement about more than one bed: