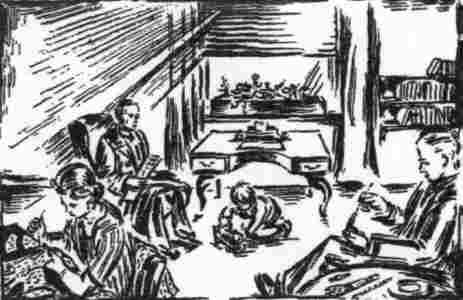 1. Ten things which are named by a compound word are pictured above.

Write ten sentences about the picture, bringing one of these compound words into each.

2 . Fill in the blanks in the following :

3 . Ten Basic words which you know, of two letters or more, can be formed from the letters of the word AGREEMENT. What are they ?

4. Use each of the following in two different senses:

5. Give Basic alternatives for the following:

(b) Why would Mr. C. not have been pleased if a tax had been put on women’s goods?
A:

(c) What are Mr. A.’s arguments for taxing women as much as men?
A:

(d) Give arguments for and against a tax on salt.
A:

(g) What reason did Mr. B. give for the fact that most of us do not give our approval to taxes?
A:

(i) What suggestion did Mr. B. make about how money might be controlled in a better way?
A:

(j) Make a short statement of your views about the taxes in your country.
A: