This family has a small house with white curtains and window-boxes full of flowers.

Mr. Robinson is the manager of a small store in the town. Mrs. Robinson does the work of the house. They have a married daughter in the country. Their other daughter is with them. She makes cushions and curtains in the work-room of a great store. Their sons are not married. Fred is in an office and Tom is in the store where his father is the manager. He may be the manager after him.

Tom and Fred have a bedroom at the back of the house and their sister Ellen has the small room under them. Their father and mother have the front bedroom.

Ellen goes to her work in the morning. She has an early meal before the others and takes some food with her in her bag. Fred goes out after his sister but before his father and brother. The men do not take food with them. Tom and his father will get their meal at the store or at a place at the other side of the street, and Fred will have his food at the office.

In the morning Mrs. Robinson does the housework. After that, she goes across the street to the store and gets food for the meal at night. When the family comes in, she will put some potatoes and plates of meat on the table. Mr. Robinson may not have his meal with his family. On the days when he does late work at the store, he has a late meal after the others.

After the meal, Mr. Robinson takes a book and goes to this place by the fire while Ellen and her mother take the plates off the table. Fred and Tom may take their seats to the other side of the fire or they may go out with their friends. On the nights when they take Ellen and their mother to the pictures, they have a quick meal before they go. Mr. Robinson does not go to the pictures. This is a night when the family will not go out.

When you are reading these steps, you will meet a number of important expansions of the prepositions. Most of these will be understood without difficulty because of their clear connection with the root use and the general sense of the passage in which they occur, but you should note them carefully so as to be able to use them correctly yourself.

Window-boxes full of flowers: A window-box is a box for a window, that is, a box on a window-still, for flowers.  “Of” is used after full to point to that with which something is filled.  Note the position of “full”. When an adjective is completed by a proposition etc., it is put immediately after, instead of before, the noun it qualities.

Mr. Robinson, Mrs. Robinson: In English, the polite title put before a man's surname for addressing or referring to him is Mr. (pronounced 'mister'). The corresponding title for a married woman is Mrs. (pronounced 'missiz'), and for an unmarried woman, Miss. The title Mister is shortened to Mr.; Missis is abbreviated as Mrs. ; and Mistress is shortened to Miss. A woman, married or unmarried, can be addressed as Ms. (pronounced Mizz). A young man (under 13 years) may be called Master, but it is not necessary and it has no short form.

The work of the house: Note the wider sense of 'belonging to' in which of may be used. It covers such connections as 'to do with' and 'caused by’.

A bedroom at the back of the house: That is, 'in the rear part of the house'. “At” is used in a similar way with front and side.

Their father and mother: When two nouns that have some close association are joined by and, the adjective would applies to both of them, the word that qualifies them both as frequently put before the first noun only and not repeated before the second.

In the morning: The parallel between space and time makes it natural for space

At night: Words to be used in descriptions of time. A systematic account of “the”

On the days: Prepositions used in indicating time will be given later, but, for

On the nights: Present.

She has an early meal: Have may be used with food-words in the sense of 'eat'

The others:  The other persons of the family.

A place at the other side of the street: A place is not necessarily just a space or area. It may be a building, a town, and so on. At this (that, or the other) side of has a special use in relation to anything, such as a street, which can be regarded as a dividing line, cutting a space into two parts. With the names of such things, it means 'in one (or the other) of the spaces so separated', without necessarily suggesting nearness to the dividing thing, though it does so here. So, English people may talk of a place in the interior of Canada as being at the other side of the Atlantic Ocean.

After that: That here represents the performance of the housework. That and, less commonly, this are used for referring back to a fact, act, or condition previously mentioned or implied.

When the family comes in: In is here used by itself like an adverb. Many prepositions can be used in this way when the thing to which the direction or position elated is clear. Frequently, as here, come in à come home. Correspondingly, be in à be at home.

Potatoes: Note the spelling, in accordance with the rule given in Step 3, of the plural of potato.

Plates of meat: Plates containing meat. Note the similarity between this use of and that in full of. Of is the word used for linking the name of a container to that of what it contains, whether it is completely full of it or not. Examples are: a shelf of books, a box of tickets.

The fire: Fire is the name given to the process or condition of burning. It is used with a or the in front of it when one is talking of a mass of burning material, whether it be a conflagration or a fire used for heating or cooking.

Go out with their friends: Go out has a special use in the sense of "go from one's home", frequently, as here, with the further suggestion of an outing for entertainment. Similarly, be out means ‘be not at home'.

The pictures: That is, the motion pictures, the cinema.

Before they go: “Before”, in the text, is a conjunction introducing a dependent statement. After may be used in the same way. Thus, the phrase after his sister, used in this Step, might be expanded to after his sister goes out. 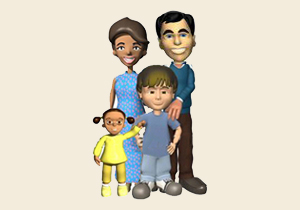 1. This is a picture of a family group going from left to right, take each person in turn and state in Basic what his or her relation is to every other person in the group.

3.  Put a preposition in the blanks in these sentences.

4. Make up a sentence using

(a)   What does Ellen take with her when she goes out to work in the morning?

(b)   Which bedroom do Tom and Fred have?

(d)   Where do Tom and Fred sometimes take their mother and sister?

(e)   What does Mr. Robinson do after his meal?