Nouns naming objects taken together as a mass or a group are treated like names of substances. We have two such 'collective' nouns in this Step, “grass” and “fruit”.

Like some, none of the adjectives of quantity given here can be preceded by “a” or a pointing or possessive adjective.

“All” is, however, an exception to the general rule by which “a”, “the”, and the pointing and possessive adjectives come before all other adjectives qualifying the same noun, and it may be used with any of these following it except a(n).

“All” is used to indicate the total number or amount taken together. All is used with both names of substances and names of things, the latter being in the plural (apart from the exception noted below).

“The” or a “possessive” or “pointing” adjective (or pronoun) used after all indicates that the total is only of the particular group or amount being referred to, not of the things named in general.

When followed by the, etc., all may qualify the name of a countable in the singular, in the sense of 'the whole of'.

There is no difference between “all these” and “all of these”; they are merely alternative expressions. The only case in which of is necessary after all is before a personal pronoun.

“Every” is also used to indicate the total number of the things named, but in contrast with “all”, it makes us think of them one by one. Therefore, like “a”, it only goes with singular nouns, and, when used with names of substances, its sense is 'every sort of'.

“No” has the sense 'not any amount of' or 'not any number of, not one,' and so its uses are parallel to those of both all and every. It makes no difference to the sense whether we say no man ('not one man') or no men ('not any men').

Note that a sentence with no may take the place of a negative formed with not.

You have learned “some” as the adjective of indefinite amount. A very common use brings out the contrast (which we have already seen implied in the pronoun) between the things, etc., singled out by some and other things of the same sort.

“Some” has also a more distinct further sense as '(a) particular but unidentified', in which it can com before a singular noun naming a countable.

The Plural of the Second Person are the same.

The Table above gives the forms of the relative pronoun, which acts as a pronoun and a conjunction at the same time. It is used after a noun or pronoun to introduce a statement giving an identifying or supplementary description2 of what is name by it. A relative pronoun may be the subject or the object of the descriptive statement or the object of a preposition in it, but whatever part it plays in the statement, it always come at the beginning.

In this Step, we are concerned only with “who” and “which”. You will note that these are both singular and plural.

“Who” is used for persons (male or female) and which are animals and things.

The son who is married is not here.

I will take the book to my mother, who is in the garden.

The singular pronoun “that” has a special use before which in the quite general sense of 'the thing' or 'a thing', with no reference to anything previously mentioned.

In the same way, the plural “those” may be used before “who” in the sense of '(the) persons'.

The possessive adjective “whose”, given in the Table for persons, may also be used for things. Like the other relative forms, it is placed at the beginning of the statement, followed by the noun it qualifies, no matter whether this is subject or object.

2 When a statement introduced by a relative is not necessary to the identification of that object, it has a comma before it (and after it if the sentence continues

As you will see, the Present and Future forms of these three new operators are quite regular. We are not concerned with the Past forms in this Step.
“Keep” has the sense of having, possibly forever, and not letting others have.

The root sense of “let” is 'put nothing in the way of the action or behavior of some person or thing', which ranges from mere non-interference to the actual giving of permission. This makes it natural for it to be followed by a noun or pronoun and an operator. The word naming the person or thing whose action is permitted comes straight after let (in the form for the object in the case of a pronoun) followed by the root form of the operator naming the action, etc.

“Seem”, like be, is an operator which does not represent an action. In its simplest use, seem is followed by an adjective. (But for more information see Step 19)

“Up” and “down” are also used adverbially.

We have noted the use of “to” after give. This is an instance of the general rule that the person or thing to which an act, etc., is directed (the 'indirect object'), or in relation to which a condition is asserted, is preceded by “to”.

When two or more adverbs or adverbial phrases follow an operator, their order cannot be reduced to exact rules, and the student must depend largely on careful observation. One general principle, however, may be given for his guidance: Always put the adverb, etc., most necessary to the sense of the operator before any other.

The rule already given said that adverbs of time follow adverbs of lace, is a special instance of this general principle.

“Near” and “far” indicate the position of one thing in relation to another. When it is desired to put in the name of that in relation to which something is near or far, we put a preposition after the adverb and say near to3 or far from.

3 It will be seen in Step 10, however, that near also has a prepositional use.

The adverbs of degree “almost” and “quite” go with adjectives, adverbs, and operators. They precede these but follow an auxiliary.

When the condition refers to the future, the dependent statement is still put in the Present Tense, even though the main statement is in the Future Tense. 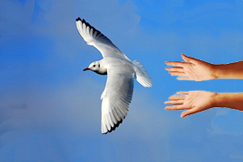 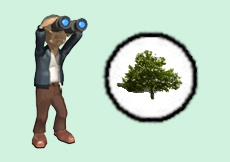 (b) Describe what the tree in the second picture seems to the man and what it is. 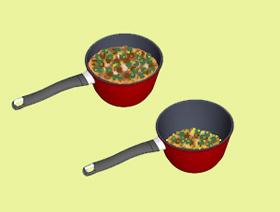 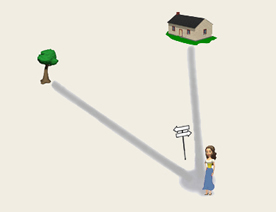