The pronoun form “what” has the sense of that which (see page 35).

The adjective old is the opposite of both new and young.

Learn the Present and Future Tense of see.

When giving an order, the root form of the operator is used without a subject.

Negative orders are formed with the auxiliary do, even when the operator is be or have (neither of which, as we have seen, takes the auxiliary in negative statements).

We now come to forms made by adding “-ing” to the operators. Going through the operators you have already learned, these are : “being”, “coming”, “doing”, “getting”, “giving”, “going”, “having”, “keeping”, “letting”, “making”, “putting”, “seeing”, “seeming”, “taking”. Note that the “e” is dropped in giving, having, making, and taking, and that the  “t” Is doubled in getting, letting, and putting.

The “-ing” forms are used like adjectives after some form of be to describe an action as in progress and not complete. 1 They may be followed by whatever would be necessary to complete the statement with any other form of the operator.

Compare these examples with:

The combination of “be” with an -ing form I sot generally used in the case of have (in the sense of 'own' or 'be in possession of'), be, seem, and see, because these operators describe a continuing condition rather than an act.

On the other hand, one may say:

In a “when” or “while” statement using “be” followed by an “-ing” form, if the subject is the same as that used in the main statement, it and the operator be are often omitted. Thus we may say:

1 Operations with the -ing endings used after be form the Continuous Tenses. They are frequently used where another language would use the Simple Present etc., Tense. The Simple Present in English is used only when we are not describing the act as in progress.

The only new preposition in this Step is “till”, which is used only in connection with time.

In negative statements, “not . . . till” generally has the special force of 'at the time named and not before'.

Note that till may be a conjunction as well as a preposition. As a conjunction, it introduces a dependent statement.

The adverb of degree, “very”, qualifies only adjectives and adverbs, and is placed immediately before them. It is never used with out or the adverbial uses of prepositions.

Adverbs may be formed from a number of adjectives by the addition of “-ly”. These adverbs describe the manner in which an act is done. Like other adverbs, they are sometimes put at the beginning. The learner must be careful, however, not to make use of this order except with adverbs with which he has found it exemplified, as it is not always possible.

There order in relation to other adverbs and adverbial phrases after an operator varies somewhat with the sense, and details must be discovered by experience. Speaking generally, however, they come after adverbs of place and before adverbs of time.

The conjunction “because” introduces a dependent statement giving a reason for what is said in the other part of the sentence.

Questions of the sort which may be answered with a simple 'yes' or 'no' are formed from statements using be, have, will, and may by simply reversing the order of the operator or auxiliary and the subject.

Though “Yes” and “No” are complete answers in themselves and may stand alone, they are sometimes combined with a full statement or, more frequently, with an abbreviated statement consisting merely of the subject and the operator or auxiliary, followed, I the case of a denial, by not. 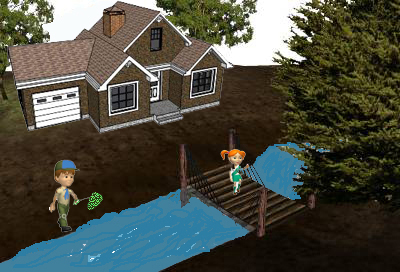 I see a small boy in the garden. He takes the berries off the plant by the wall. He has a basket. He puts some berries into the basket and some into his pocket. The birds do not take the berries while he is there. I see what he does but I do not let him see me.